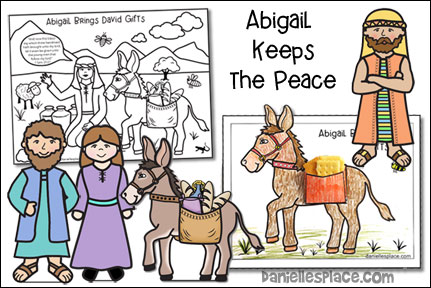 The following crafts and activities come for them Bible Lesson "Abigail Keeps the Peace". This lesson is available to members on The Resource Room and as in Instant Digital Download.

Learning Concept: Children learn through Abigail’s example that it is better to keep the peace than to be sorry later for what you did in anger.

This coloring sheet is available in both KJV and NIV.

1. Before class print out the coloring sheet and make copies.

2. In class have your children color the picture. While they work ask them what they think is happening in the picture, what the donkey is carrying, and why the woman might be on her knees.

1. Before class print out the activity sheet and the donkey’s pack pattern and make copies.

2. In class, have your children color the sheet and donkey’s ears and pack pattern.

3. Cut out the ears and pack patterns.

4. Fold back all the lines on the donkey’s pack pattern and glue the pack to the activity sheet.

5. Glue the ears onto the activity sheet

6. Have your children place crackers or other food items in the donkey’s pack.

7. As they work, tell them that the lesson today is about a woman who packed her donkeys with lots of food for David and his men because her husband wouldn’t.

Sometimes we do things when we are angry or upset without really thinking about what will happen. We let our emotions get the better of us, and then we are sorry when we hurt the people around us. Our story today is about a man who almost did this same thing, but thanks to a very smart woman’s advice, through God’s direction, she stopped him from doing something that he would be sorry for later. 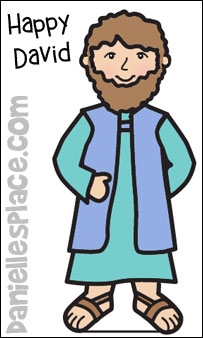 David was a hero. (Show the children the happy-faced David puppet.)

Everyone knew David; he was famous for killing a giant with only a slingshot and one stone. He even worked for King Saul for a while until King Saul got jealous of him.  He had to run away and hide so King Saul wouldn’t kill him. Now David was on the run with his followers. They hid from King Saul and protected the local people where ever they happened to be staying.

One day David and his men moved down to the desert where a man named Nabal lived.

(Show your children the Nabal puppet.)

Nabal was a very rich man, but he was rude and mean. He had a wife named Abigail who was smart and beautiful.

David sent ten of his men to go and talk to Nabal. He instructed them to tell Nabal that he had sent his greetings and wished him long life and good health. He told his men to remind Nabal that when they were last in his area, they had treated his shepherds very well and never took anything that wasn’t theirs. They protected his property.

When the men went and told Nabal everything that David had told him to say, Nabal was very rude and insulted David.

(Hold up the Nabal puppet.)

He told the men,  “Why should I help David? Who does he think he is? I am way too busy. Why should I give his men food and water?”

The men went back to David and told him what Nabal had said and this made David very angry.

He ordered them to put on their swords and about 400 men left with David to go and fight Nabal.

In the meantime, one of Nabal’s servants went and told Abigail what was happening. He told her that Nabal had been very rude and that David and his men were coming to kill the whole family. He begged her to do something to save everyone from David’s army.

Abigail didn’t waste any time. She ordered her servants to load up lots of food on the donkeys and take them to David. She followed behind the donkeys. She didn’t tell her wicked husband what she was doing.

When Abigail found David, she quickly got off her donkey and bowed down before him, and begged him to listen to her.

(Show the Abigail puppet on her knees.)

She begged him not to kill her husband or her family. She said,” My husband is a fool, don’t pay any attention to him. If I had known your men had come to ask for food, I would have given it to them. “Please accept these gifts from me. Don’t take revenge on him, but let the LORD take care of Nabal. The LORD will reward you for not doing wrong because you fight the LORD’s battles. The LORD will make you king and you don’t want needless bloodshed and vengeance to be a blemish on your record. 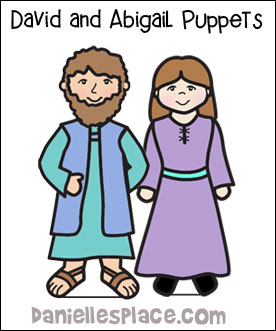 (Turn the David puppet around so the happy face is showing.)

Then David said, “Praise God! He has sent you to me today. You have good sense and have kept me from killing and taking revenge.

The next day Abigail’s husband had a heart attack and died when she told him what she had done.

(Lay the Nabal puppet down flat on a table.)

(Put the happy David and Abigail puppets next to each other.)

Make Stick Puppets and Put on a Puppet Skit

1. Before class, print out the stick puppet patterns onto card stock and cut them out. In class have your children color the paper dolls and tape them to jumbo craft sticks.

2. In class, have your children color the paper dolls and tape them to jumbo craft sticks. 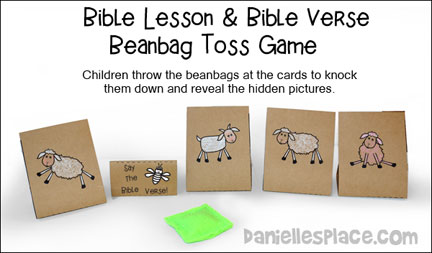 1. Before class, prepare the game. Print out the game pieces onto card stock (Heavy paper).

3. In class, place the cards in front of the room on a table or floor with the pictures facing down.

4. Have your children throw beanbags or balls at the game pieces and try to knock the pieces backward so that the pictures on the bottom of the cards pop up. The child who knocks over a game piece should either say the Bible verse or tell something about the Bible lesson relating to the picture shown. Keep playing until all the children have had a turn throwing the beanbag.