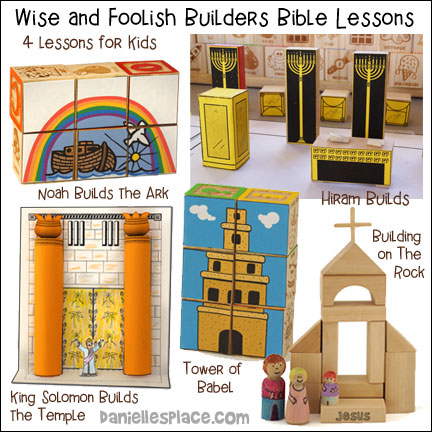 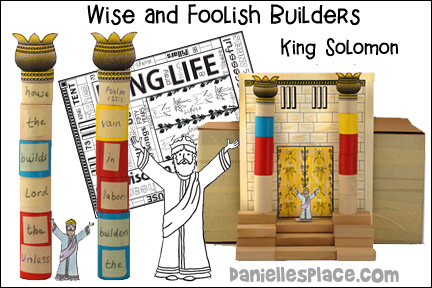 This is the third lesson in the Building on the Rock Bible Lessons Series. This series of lessons uses Maxim Enterprise PlaySkool ABC Blocks with Bag (40-Piece) and PlaySkool C/N Blocks (80-Piece).

This lesson was designed for both preschool and older children, use the material that is appropriate for your children's skill level. The Complete Lesson is available to members on The Resource Room.

"Unless the Lord builds the house, the builders labor in vain." Psalm 127:1

Teaching Concept: God blessed Solomon with great wisdom and riches and choose him to build the first temple because he was pleased with Solomon. Solomon was known for his wisdom concerning right and wrong, and plants and animals, yet his foolish disobedience caused the eventual downfall of the temple and Jerusalem.

Really cool lesson! I love it when I can learn something new too. Thank you. Kayte 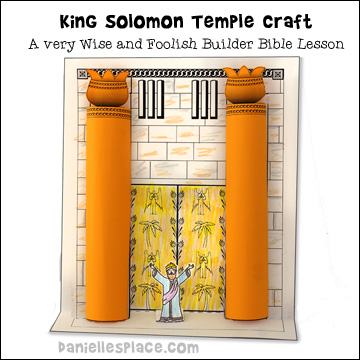 Tacky Glue (Don't use school glue because it isn't sticky enough.) and Scissors

1. Before class print out the Pillar Patterns and King Solomon Patterns (This page also has patterns for the next activity) on to white paper and cut them out.

2. Print out the Temple Pattern onto card stock.

5. Fold back the bottom of King Solomon so it he stand up in front of the temple.

Psalm 127:1 - Unless the House is Built on the Lord Bible Verse Activity Sheet

Children color the words to the Bible verse to help them remember the verse. Available in both KJV and NIV. 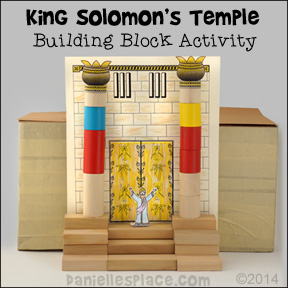 1. Before class print out pictures of King Solomon's temple from the Internet. Place them on the table with the blocks.

2. Print out the Temple Pattern onto card stock (Heavy paper). You can color the temple before class or let your children color them in class. Glue the temple pictures to cereal boxes or other boxes so they will stand up. Do not cut off the bottom of the pattern it is raised so that three blocks can be placed in front of the temple to make steps.

3. Print out the Capitals and King Solomon Pattern (If you haven't printed them out for the other craft). Color the capitals, cut them out and tape them to the top of short cylinder blocks. Cut out King Solomon, color him, and fold back the tab so he will stand up. Instead of using the paper King Solomon, you could use wooden pegs instead.

4. As your children arrive tell them that they will be learning about a very wise and foolish builder who built a temple for the Lord. Ask them to use the blocks to build a temple similar to Solomon's temple. Answer any questions they may have about the pictures. 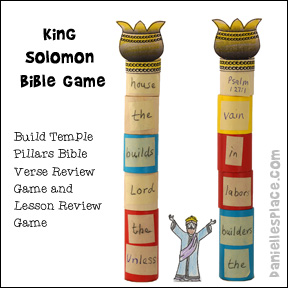 Before class write the Bible verse on pieces of masking tape and cut them apart. Use the capital patterns from King Solomon's pillar craft above. Stack five or six blocks on top of each other making two pillars with capitals on the top. (I had to use one block that was twice as tall as the others.) Cut the words apart and stick them to the cylinder-shaped blocks. Tape the words on the block pillar in order so that the first six words "Unless the Lord builds the house"

Older Children - Before the game explain to the children that the names of the pillars, Boaz and Jachin, had meaning other than just a name. Boaz means "by His strength" and Jachin means "God will establish". So the pillars give God the credit for the building of the temple meaning Solomon would not have been able to build it without God's help.

In class separate your children into teams and time them to see which team can build the two pillars in the shortest amount of time. If you have colored blocks, you may want to change the words around so that the children who haven't played yet don't memorize the blocks in order of the colors.

Younger Children - If you have younger children who can't read, you can just use the blocks to build two pillars. See which team can build the highest pillar.

Here's a fun way to review a lesson! Children search as fast as they can for the word or words on the activity sheet that answers the questions about the Bible lesson.

Act Out the Story

Encourage your children to act out parts of the story using the King Solomon paper doll or have them make their characters using peg dolls. This story spans about ten chapters so you can assign groups of children a chapter or parts of chapters to act out or illustrate.

Younger children can act out the part of the story where King Solomon kneels to pray for the people and then stands up and addresses the crowd. 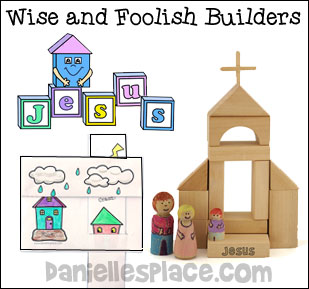 The Lord is My Rock

The Lord is My Rock Bible Lesson for Older Children 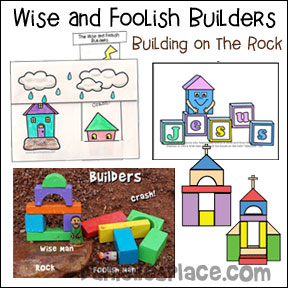 Building on the Rock 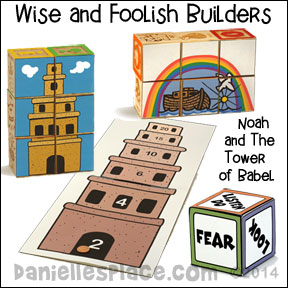 The Tower of Babel and Noah's Ark 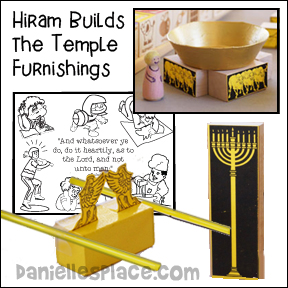 Stand Strong: The Parable of the Wise and Foolish Builders (Phonetic Bible Stories)

The House That Went Ker---Splat!: The Parable of the Wise and Foolish Builders (The Bug Parables) 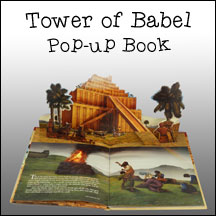 The Tower of Babel (Arch Books)

This puzzle includes Noah, Daniel, Adam and Eve, David and Goliath, Moses and Jonah. Use this puzzle to review the Bible stories and then play a relay race to see what team can put the puzzle together the quickest.

Rose Guide to the Temple