Hats aren't just for looks. Your children will learn from the following crafts and activities the history and importance of different kinds of hats. 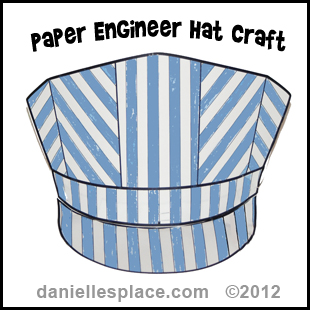 Have you ever wondered why people in different professions wear different types of hats? In the story "Stormy's Hat: Just Right for a Railroad Man

" by Eric A. Kimmel you will learn why an engineer's hat looks the way it does, and the history of how it came to be.

After reading this story have your children make their own engineer hats from paper. 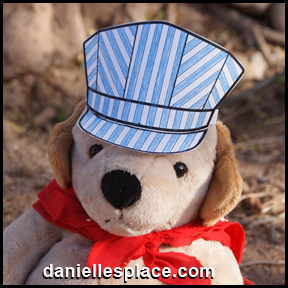 3. To finish staple the band to the back of the hat to fit your child's head.

4. You can print the hat patterns smaller to make matching hats for stuffed animals and dolls.

For direction on how to make this train out of boxes and an oatmeal box, go to the Planes, Trains, and Automobile Crafts and Learning Activities Page. 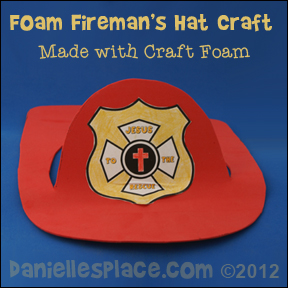 Pen for Tracing the Pattern

How to Make the Craft Foam Fireman's Hat:

1. Print out the patterns.

Patterns Includes three badges and a pattern in two smaller sizes so you can make a matching hat for your stuffed animals or dolls. 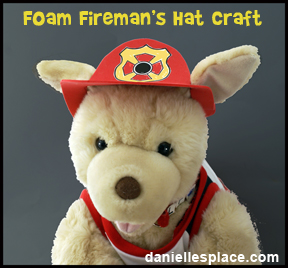 2. Cut out the patterns and tape them together matching up the straight line at the edge of each pattern to make one large pattern.

3. Place the pattern on a piece of craft foam, trace around the pattern, and then cut it out. Cut out the center moon shape. You can make this hat smaller for younger children. Follow the printing problem link above for directions on how to do this.

4. Draw a badge shape on a piece of paper color it and cut it out. Glue it to the front of the hat. 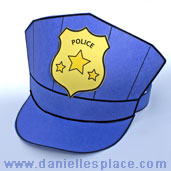 This hat is very easy to make. All you need is a piece of construction paper, scissors and tape. Make the band shorter and longer to fit different head sizes.

Children's will have hours of fun pretending to be policemen and police women.

"Boss of the Plains" Stetson Hat 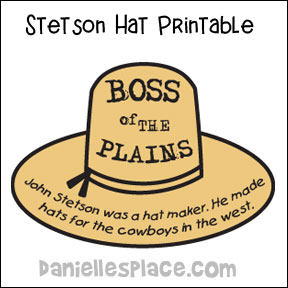 During his stay in Colorada John Stetson made himself a "big and picturesque" hat that would protect him from the scorching sun and wind. One day a horseman offered him $5.00 for his hat. John took it off his head and gave it to him.

Since mining for gold didn't prove profitable, John moved back East to make hats again. He knew that he had to make something different from all the other hat makers and that is when he decided to make hats like the one he had made for himself.

It soon became the most popular hat in the West.

Read the book "Boss of the Plains, The Hat that Won the West

" by Laurie Carson. Then have your children write facts about John Stetson and the "Boss of the Plains" on the Stetson hat printables.

You can also use a blank hat shape and have your children write more facts, vocabulary words, or a short summary of the book.

Staple the hat that has the title of the book on top of the children's pages to make a class book.

"Do You Have a Hat?" Learning Activity

Many famous people wore distinctive hats. Francisco de Goya wore a hat with candles on the brim, Stravinsky wore an old green beret, Carmen Miranda wore a hat topped with fruit, and everyone knows what Abe Lincoln's hat looked like. This is a great book to encourage children to think about how hats can fit a person's personality and even become something that helps identify him or her.

" by Eileen Spinelli and then have your children bring in their favorite hats and share with the class why their hats are special to them.

Writing and Drawing Activity - Ask your students, "If you could have any hat in the world, what would it look like? What would you use it for?

Have them write about their hat or draw a picture of what it would look like and label it, and then have them share their ideas with the class.

My Hat Activity - Make paper hats from newspaper or newsprint paper and have your children decorate theirs hats to fit their personalities. See Directions below.

How to Make a Newspaper Hat

2. Than fold the newspaper down lengthwise.

3. Place the folded newspaper on a table so that the edge you just folded is at the top.

4. Fold the two top corners down so that they meet at the center.

5. Fold the bottom edge up so that it meets the bottom of the folded corners.

"The Printer" and How to Make a Newspaper Printer's Hat

" by Myron Uhlberg a touching story about a deaf man who worked at as a printer for a newspaper. He would bring home the paper every day, read it, and then make his son a paper hat by folding up a page of the newspaper. His son wouldn't take it off until it was time to go to bed. One day the deaf man noticed a fire in the shop and alerted everyone of the danger using sign language.

He made sure everyone got out okay and was the last one to leave the building. When the shop was rebuilt and the first newspapers run, the men at the shop who hadn't acknowledged him before all said, "Thank you," in sign language and presented him with a newspaper hat made from the freshly printed newspaper.

Make a Printer's Newspaper Hat like the one in the story

Printers wore four-cornered hats made from newspapers to protect their hair from the fine particles of ink that the high-speed presses sprayed into the air.

There is a diagram at the end of the book that shows how to make a printer's hat from a sheet of newspaper. You can also find directions on YouTube.

How to Make a Printer's Hat Out of Newspaper

1. Unfold a large sheet of newspaper and flatten it out.

2. Fold the paper in half and then turn it so that the fold is at the top.

5. Fold it up the bottom again at the bottom of the triangles to make the hat band.

7. Fold the bottom two corners in so that they meet in the middle.

8. Fold the bottom two corners up so that the meet at the folded paper above.

9. Fold up the bottom flap and tuck in in the band.

10. Fold down the top corner and tuck it into the band.

11. Open up the hat and fold it into a diamond shape.

12. Fold down the top corner and tuck it in the band.

13. Fold up the bottom corner and fold it in the brim and then open the hat creasing the corners.

1. "My Hat, It Has Three Corners"- Sing the song once with all the words and each time after that leave out another word.

2. Yankee Doodle Dandy - Go to Kiddles for the lyrics and music.

How to Make Paper Hats Links

3. How to make a Paper Hat from newspaper and masking tape.

Hat Crafts on Other Pages 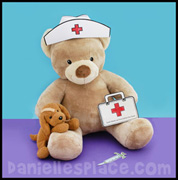 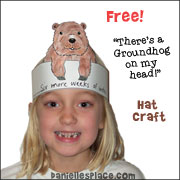 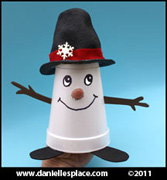 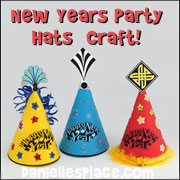 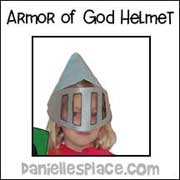 Rembrandt's Hat - Bear loses his hat and is persuaded to find a new one. Bear listens to his friends advice and buys a hat he doesn't really like. In the end he learns that he should have listened to his heart, gives away his new hat, and buys one he likes.

The Scarecrow's Hat - A chicken admires the scarecrow's hat who would gladly trade it for a walking stick. Chicken doesn't have a walking stick, but knows someone who does. She works out many trades with other animals until she is able to gets what she wants.

The Old Blue Hat - A young boy doesn't have anyone to play with or anything to do until he finds an old blue hat. The hat inspires his imagination and leads him to meet animals and ultimately a new friend.

One Winter's Day - Even though hedgehog just lost his home he stops to help the other animals who are suffering in the storm. He is rewarded for his kindness when they get together and build him a new home.

The Hat - A hedgehog gets a stocking stuck on his head and all the farm animals laugh at him.

Old Hat New Hat - Bear thinks he needs a new hat. He tries on many hats but none of them will do. At the end he decides his old hat is just right.

Miss Fannie's Hat - Miss Fannie has lots of hats and they are all her favorites. Each one brings back memories. When she is asked to donate one for a church auction she has a hard time deciding which one to give up. In the end she is happy with her decision because she knows she is doing the right thing.

Whose Hat Is This?: A Look at Hats Workers Wear - Hard, Tall, and Shiny