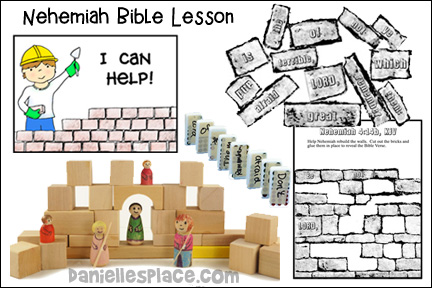 Print out onto card stock (heavy paper) and make copies. "Be not ye afraid of them: remember the LORD, which is great and terrible." Nehemiah 14:4b.

Children learn, through Nehemiah's example, how they can help others who are in need. 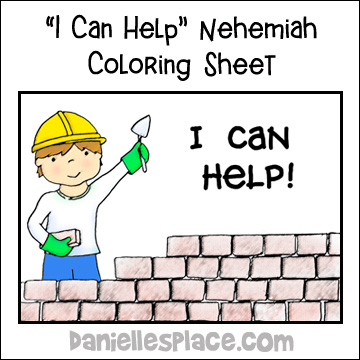 Before class print out the color sheet and make copies. While your children work ask them how they help around the house and neighborhood. 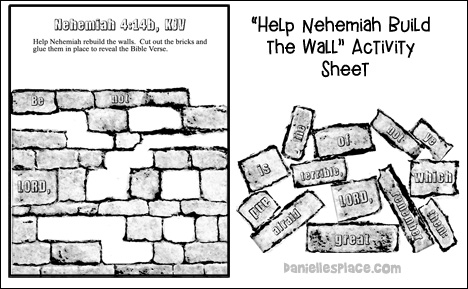 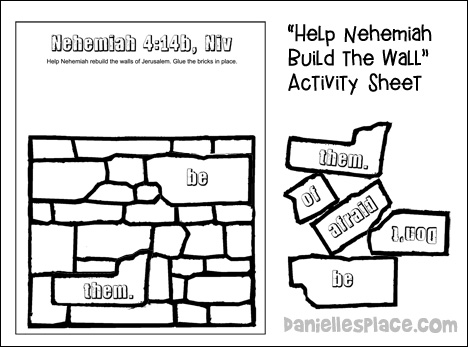 Children help Nehemiah rebuild the walls of Jerusalem by gluing the stones in place to reveal the Bible verse.

3. Build a Wall with Dominoes

Before class write the Bible verse on pieces of masking tape and tape them to Dominoes (one word per Domino.) As children arrive let them work together to see how high they can build a wall without it falling. (The words will be used later as with a review game.)

Have you ever gotten some bad news or heard something that made you sad? You may have heard some of these things:

A city is destroyed by a flood, earthquake, or fire and people have nowhere to live.

How does it make you feel when you hear bad news? You might feel sad, scared, angry, worried, or helpless.

Our story today is about a man named Nehemiah. One day he heard some really bad news. He heard that the Jews in Jerusalem were in great trouble. The walls of the city were broken down and the gates were all burned.

What do you think Nehemiah did when he heard the bad news? Nehemiah had the same feelings that you have when you hear bad news. He was sad, scared, angry and worried. He may have even felt helpless. But that didn't stop Nehemiah from trying to help.

At first Nehemiah cried about the situation because he was so sad. But he wanted to do something to help. He was a smart man and he knew that God cared about him and the people in Jerusalem.

What else do you think Nehemiah did? What can you do when you are very sad about something, besides crying? Crying doesn't really help the people that are in trouble, does it? Nehemiah knew he had to do something to help so he prayed and fasted. Fasting means that you go without food (or other things) to show God that you are very serious about your prayers.) He prayed that God would give him strength and that he would be successful in helping his friends in Jerusalem.

Nehemiah knew it wouldn't be easy. There would be a lot of things that would make it difficult. The first problem he had was that he didn't know if he would be able to help because of his job. He was a cupbearer to the king. His job was to make sure that the king's food and drink were safe. He didn't know if the king would let him go and help, or if the king would get angry with him if he asked.

One day while Nehemiah was working the king noticed that he was very sad. He noticed this because Nehemiah had never been sad around him before. He asked him why he was so sad. Even though Nehemiah was afraid, he spoke up and told the king about the danger the people were in.

The king thought about it and asked Nehemiah what he wanted to do about it. Nehemiah prayed a quick prayer, and then answered the king, "If it is okay with you, and you have been happy with my work, send me to the city so that I can rebuild it."

Nehemiah went to Jerusalem and talked the people there into helping him rebuild. But when they started rebuilding some of their enemies found out about it and began to make fun of them. They said that they would never be able to rebuild the walls because the damage was too great. But the Jews didn't listen to them and worked hard on rebuilding the wall, gates, and towers. It was very hard work but just about everyone pitched in, even the girls. Some of the men refused to do their part, but the people ignored them and did as much as they could. They worked side-by-side all around the city. The priests, goldsmiths, perfume-makers, rulers, sons and daughters, countrymen, servants, guards, and merchants worked with all their hearts.

When their enemies heard about all the repairs they were making they became very angry. They made fun of their work and said, "If a fox climbed up on the wall, it would break down their walls of stone!" But when they saw that the wall was halfway built they became even angrier. They plotted to come and fight the people to stop their work. But Nehemiah heard of the plot and posted guards to protect the workers.

The workers were getting very tired and began to complain, "We are too tired and there is no way we can rebuild the wall because there is too much damage, and our enemies are threatening to kill us." Nehemiah posted more guards and told them not to be afraid, 'Remember the Lord, who is great and awesome, and fight for your brothers, your sons and daughters, your wives and your homes."

When things got hard for Nehemiah and there seemed to be so many problems, Nehemiah didn't quite, he prayed to God to give him strength.

From that day on the builders wore their swords at their sides as they worked. They worked from first light until it was too dark to see and were able to complete the wall in only 52 days!

What Can You do to Help a Bad Situation?

Nehemiah prayed and fasted. Ask God to give you strength, wisdom about what you would do, and success in helping others. Before doing anything you should always pray about it.

2. Tell Others and Ask for Help

Nehemiah told the King about the problem and asked for help even though he was scared. Let other people know about the situation because they may be able to help.

Nehemiah got involved. He said, "Send me." He knew he could make a difference with God's help. You can get involved in many ways. You can go to where help is needed or you can help from your own home or country. Put up flyers, collect money, send cards, food, gifts, etc.

Nehemiah talked to the people and persuaded them to help build the wall. He organized them into groups and made sure everyone had something to do. When some of the men refused to help, he didn't let it get him down. He concentrated on the ones who would help. You can also get other people to help, organize them so the work can be done. Encourage them, support them, and protect them.

5. Don't Quit When Things Get Hard

Nehemiah didn't give up when things got hard. When the people began to complain and his enemies were trying to stop the work, Nehemiah continued to pray and encourage the people to continue. He listened to them and tried to protect them.

Helping people in need isn't always fun or rewarding. Realize that it is a lot of hard work. Ask God to give you strength when it gets hard.

Father, we thank you for providing for our needs. Help us to be aware when others are having problems. Show us how to get involved, and give us the strength and courage to help when things get hard. Amen.

1. Build a Diorama of the Walls of Jerusalem

Bring in boxes, clay, and other materials to build a diorama of the walls of Jerusalem. Show your children some pictures of Jerusalem from the Internet and let them create a scene with the supplies you have provided.

Children can make bricks from clay, cut up pieces of Styrofoam, or blocks to build the walls, and use small toys for the people. 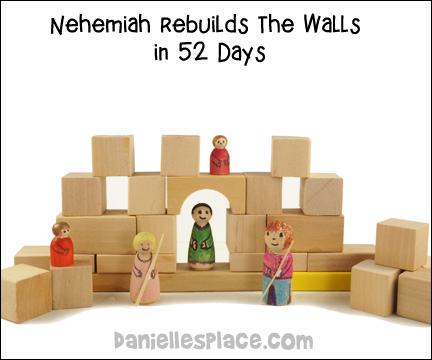 Give your children blocks and small people figures. Tell them to build a wall around the people to protect them.

Use the Dominoes with the words taped to them from the opening activity. Break your children up into teams and give each team a set of Dominoes with a set of words that spell out the complete verse.

1. Have each team turn over all the Dominoes so that the words aren't showing. 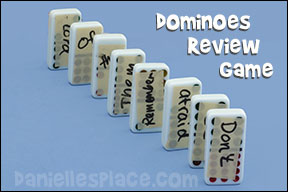 2. See which team can be the first to place all the Dominoes in order in a row to spell out the verse without knocking over any of the Dominoes.

3. Players in each team take turns turning over one Domino at a time. If a player finds the first word in the verse, he or she gets to set up the Domino to start the row. If the word is not the first word, he or she turns it back over and the next player tries to find the first word.

5. The player on the team that finds the last word to complete the verse gets to knock down the first Domino so that the whole row falls. (This game works best if you have the children set up the Dominoes on a separate table from where they are playing the game.)

1. Write the verse or part of the verse on the board or sheets of paper so that all the children can see it.

2. Review the verse, word for word.

3. Divide your children up into teams and give each team a set of Dominoes with Bible verse words on them. Have each team work together to set up the Dominoes in order to spell out the verse.

1. Remind your children about the story and how Nehemiah had each worker protected by a guard as they worked. Tell them that they are going to play a game relating to this part of the story.

2. Divide your children up into two teams.

3. Pick two people from the opposing team to be the enemy.

4.; Have the building team pick one person to be the guard. The guard should sit on the opposite side of the table in front of the wall that is being built to protect it from the enemies.

5. Have the building team build a wall as high as they can in 30 seconds while the "two enemies" try to knock down the wall or slow the building using small beanbags or other soft balls. The "enemies" can only throw the beanbags at the wall, not the builders. Also mark a place on the floor where the enemies must stand at all times.

6. The team that builds the highest wall after 30 seconds wins.

Divide your children up into teams. Take turns asking each team questions from the lesson and from previous lessons. If a team member gets the question correct, he gets to add a block to he team's wall. The team with the highest wall at the end of the game wins.

(Sing to the tune of "Joshua Fought the Battle of Jericho")

Your Every Day Read and Pray Bible for Kids

The Storm that Stopped

Cold-Case Christianity for Kids: Investigate Jesus with a Real Detective

The Garden, the Curtain and the Cross

The Gospel Story Bible: Discovering Jesus in the Old and New Testaments