How to Make Crafts and Learning Activities
Relating to Worms 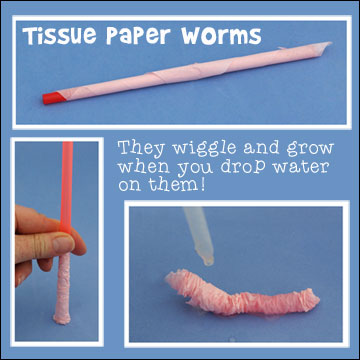 Use this raft as a fun activity to supplement your worm studies. Home school children will enjoy watching the tissue paper worms wiggle and grow when they drop water on the them. This activity can also be used to reinforce measuring skills.

Smooth Straws - Don't use the straws with the bendable ends.

How to Make the Tissue Paper Worms:

1. Have your child use a ruler to measure the tissue paper into six-inch squares and then cut them out.

2. Place a six-inch square piece of paper on the table, and then place the center of the straw on one corner of the tissue paper.

5. Place the tissue paper worm on a table and drop a few drops of water on the worm. Watch the worm as it wiggles and grows on the table.

1. Print out the worm patterns onto pink or tan card stock and cut them out. (Patterns are available to Members. If you aren't a member, you can can just cut out "S-shaped" worms to use instead of the pattern.)

2. Pick several words your child is having problems spelling. Write one letter of each word on a worm, leaving one worm blank. Place all the worms in a bucket. Tell your child that the worms are about to

become bait. He can save them from this fate by spelling all his words correctly.

3. Give him the worm without a letter on it. Then tell him the first word. He should look through the bucket of worms and pick out the ones that spell out the word you gave him, and hook each worm on the next worm to make a chain that spells out the word. If he spells it correctly, he can pull the pail of worms out of the bucket.

4. Tell your child the next word, and have him do the same thing. Keep playing until he has saved all the worms.

When you are all done saving the worms, curl up the heads and tails of the worms and see who can pick up the most worms by connecting them into a chain. Play like the Barrel of Monkeys game.

How to Make Pail of Worms Craft:

2. Place the folded piece of paper on a table so that the folded, long edge is at the bottom.

3. Fold over the right, bottom corner so that the point meets the left edge of the triangle.

4. Fold over the left, bottom corner so that the point meets the right edge of the triangle.

Glue in a pipe cleaner for a handle. Older children can cut out their own worms from pink construction paper. Cut them out yourself if you have younger children and let them make faces on the worms. Write one word of the memory verse on each worm. 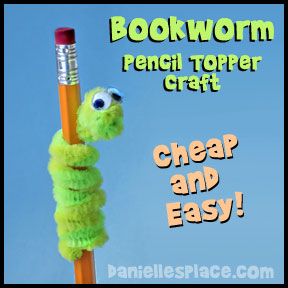 How to Make Bookworm Pencil Topper:

1. Start by rolling one end of the Chenille stem into a ball. Glue it so that it doesn't come uncurled.

Yucky Worms - A little boy thinks worms are yucky until he learns how amazing and useful they are. Great book to introduce children to worms.

Diary of a Worm - An hilarious account of a worms daily activities in the form a a journal. 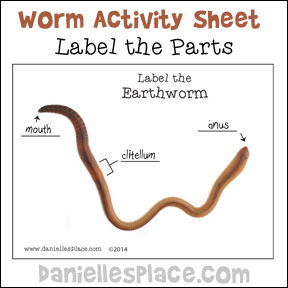 The printable earthworm picture takes a full-sized sheet of paper. The earthworm is about eight inches long so it gives children plenty of room to label the parts.

After reading and studying earthworms, have your children label the earthworm parts and then draw in any other detail they would like such as earthworm castings, tunnels, etc.

They can also write facts about earthworms around the outside of the picture.

Learn all about worms from Herman the Worm - Go to The Adventures of Herman Web site for directions.

Harvest your own worms - Go to The Adventures of Herman Web site for directions.

Worms Eat Our Garbage: Classroom Activities for a Better Environment

Worms Eat My Garbage: How to Set Up and Maintain a Worm Composting System