Paul's Early Life as a Pharisee 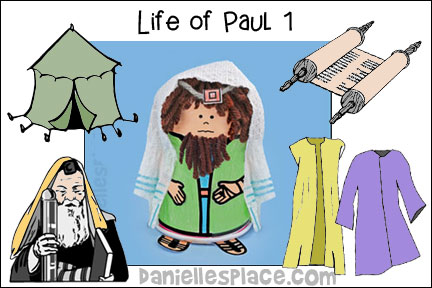 The purpose of this craft is to show your children how ritualistic the Pharisees were, and how they let their rituals become more important to them than following God. 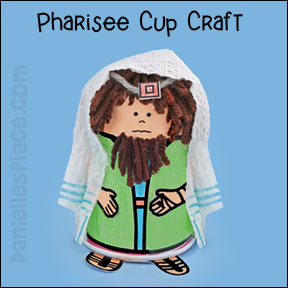 Yarn for Hair and Beard

A Pharisee was one of the three major Jewish religious groups at the time of the New Testament. The word Pharisee means "separated ones". They were also known as chasidim which meant "loyal to God or loved by God". They sought to obey God, but they eventually became so extreme in some parts of obeying the laws that they didn't realize they were missing other parts. They also added many laws of their own. Their rituals became more important to them than serving God. When they saw how much power Jesus had they were very jealous of him, and when Christianity starting spreading, they became one of its biggest opponents. Paul was a pharisee.

1. Glue the body pattern onto the cup and then glue on the arms and feet. Explain what the phylacteries were and why the Pharisees used them.

Pharisee took Deut. 6: 8 literally and tied boxes filled with God's words on their foreheads and arms. Phylacteries are cube-shaped leather cases with scripture verses in them. The phylactery that was tied on the inside of the left arm was placed near the elbow so that when the arm was bent the phylactery would rest over the heart. The knot fastening it to the arm was in the form of the Hebrew letter yodh (Y) and the end of the sting wound around the middle finger.

2. Make the Hair and Forehead Phylactery - To make the hair loosely wind yarn around the 5" x 5" pieces of cardboard about 25 times and then pull it off. Tie the yarn together in the middle with another piece of yarn. Cut the looped ends to make a pompom. Glue the pompom to the bottom of the cup for the hair, and then give the Pharisee a haircut. Children may also want to glue pieces of yarn to the beard.

Explain that the Jewish people only wore their hair long if they were carrying out a vow. A few had a lifelong vow, but most would only let their hair grow for a short period of time, weeks or a month. Some religious groups would not cut their beards, but some would.

3. Make the prayer shawl or tallit - Cut five inches off the end of a paper towel. Use the entire length of the paper towel. Cut fringes at each end of the shawl. To do this cut a rectangle shape out of each end leaving about 1/2" of paper towel on each end. (See diagram below) Have your children draw blue lines through each tassel. (Numbers 15:37-41) (See the link below to read about why the Jews don't put the blue line in the tassels today.) (Deut. 22:12)

The Talmud contains Jewish law, ethics, philosophy, customs, and history, and gives detailed explanations of how the tassels should be made (Manmade law). They were supposed to use four strands folded in half to make eight. Those four strands were supposed to be made of eight fine threads. They also had detailed instructions on how to tie the knot to make the eight strands. They were also supposed to include a strand that was dyed blue with a specific dye (God's instructions), but the source of the dye has been lost so they no longer use the blue strand. Pointing out these facts will help your children understand how the religious leaders made the laws so complicated to follow that following the made-up laws became more important than following God's laws. Check out Wikipedia under Thread and Knots - https://en.wikipedia.org/wiki/Tzitzit

The Tallit or Prayer Shawl - https://www.templesanjose.org/JudaismInfo/faq/tallit.htm - This is very interesting reading and explains what the blue stripe means and why they don't put them on the tassel any more.

The Life of Paul 2 - Paul Sees the Light 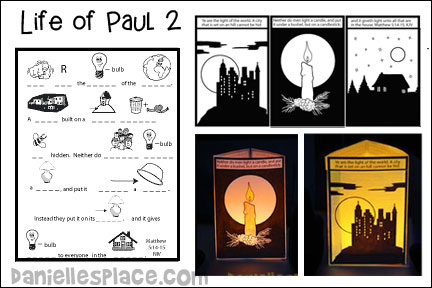 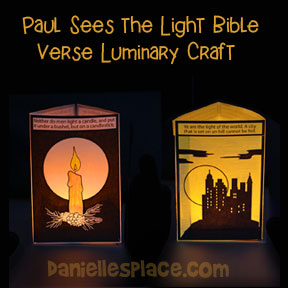 Each panel on this three-sided luminary depicts part of the Bible verse.

Matthew 5:14-15 "Ye are the light of the world. A city that is set on an hill cannot be hid. Neither do men light a candle, and put it under a bushel, but on a candlestick; and it giveth light unto all that are in the house." This craft goes along with the Bible lesson "Paul Sees the Light" on The Resource Room.

Life of Paul 3 - Paul Escapes Over a Wall 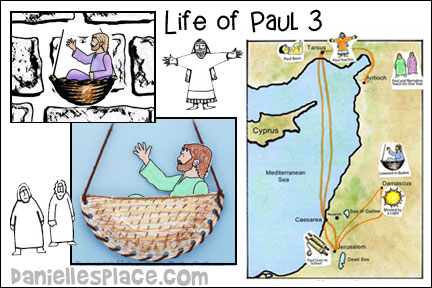 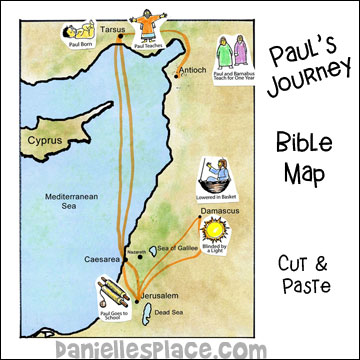 The printable map and pictures for this activity is available to members of The Resource Room on the lesson "Paul Escapes Over a Wall".

Children color the map and pictures and then cut the pictures apart.

If you have younger children you can use the colored map as a visual during the lesson and have them make Paul in a basket craft below. As you review the lesson have your children glue the pictures in the appropriate place on the map.

2. Scroll picture - Paul studies to be a Pharisee. Glue to the city of Jerusalem

3. Sun picture - Glue to Damascus where Paul is blinded by the light.

5. Paul in a basket - Glue to the city of Damascus.

6. Picture of Paul and Barnabas - Glue to Antioch 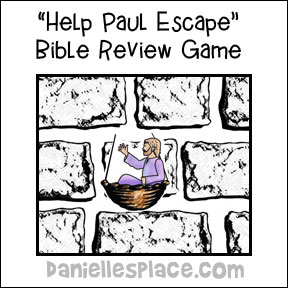 In this game children compete to be the first team to "lower Paul over the wall and bring him safely to the bottom".

If a team gets the question correct, the teacher moves the Paul in a basket picture down one row of stones.

The team whose picture of Paul reaches the bottom of the wall first wins.

I just used your resource room materials for the first time this month. So far I found it very helpful. I am the SS Superintendant for my church and I really find it time consuming the other way I used to prepare for the prek/kindergarten class. Your site helps me save time. I loved the stories and the craft ideas, well, I never would have thought of such cute ideas. The kids love it too. We started this year with the stories of God creating the world, then, animals (even spiders..yuck). We have had a great time with them and we like to keep their lessons simple and crafts simple as well. Thank you for sharing your talent God has given you, I'm very happy with everything I find on your website. Peace, Blessings and Joy, Laura J.

Paul Lowered in a Basket Bible Craft for Sunday School

Acts 9:25 - Paul's followers took him by night and lowered him in a basket through an opening in the wall. 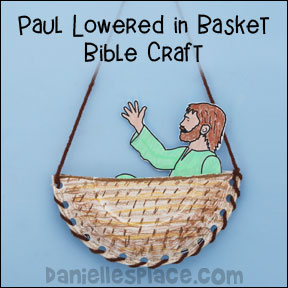 1. Cut paper plates in half. Place to halves top side to top side to form a basket, and glue them together. Punch holes around the edges.

2. In class have your children color the "baskets" and then thread yarn through the holes leaving about one foot of yarn on each side of the basket. Tie the ends together over the basket.

4. Have your children draw and color a picture of Paul and place it in the basket.

5. Use the craft to act out the story.

Give each child a plastic banana split bowl and have them put a pre-sliced banana inside. Used canned whipped cream to spread whipped cream on to of the banana. Place two teddy grahams in the whipped cream; one for Paul and the other for Silas. You can also put half of a straw down into the banana with a sail attached to it. This makes a really cute craft for the 2's through 5 year olds. They can close the top of the bowl and float it or eat it first. Either way, they have a boat and a sail to play with and it is very inexpensive. This went over really well ! Yum !!! Sent in by Connie

Make a snake with plastic bottle caps from soft drink products and two corks for the head and tail.

Drill a hole in the center of each cap and the corks. String red plastic cord through one small cork then 25 plastic caps per snake and end with the other small cork.

Tie off at the tail end. Leave some of the cord hanging out for the tongue on the other end. I spray painted the caps green. When it dried I put wiggly eyes on the tongue at the head end. Also, if you want to, you can assembly the first two caps open side to open side and put a couple of beans in it, then hot glue them together. This way the snake rattles. We used this craft for VBS when Paul was bitten by the viper. The 5th and 6th graders enjoyed making their snakes and painting them. Connie

For other snake crafts go the the Snake Crafts Page. 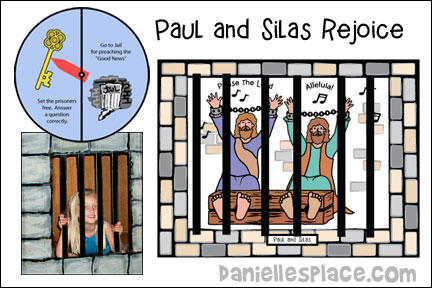 Make Paper Chains and Act Out The Story 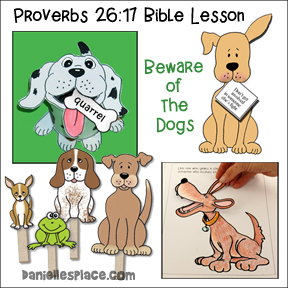 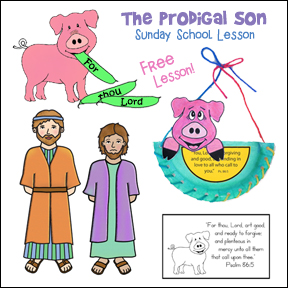 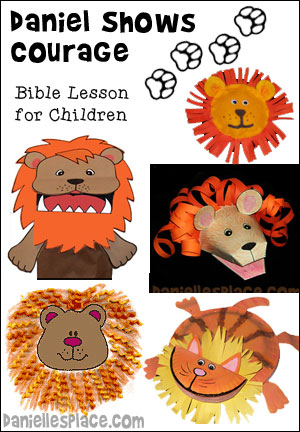 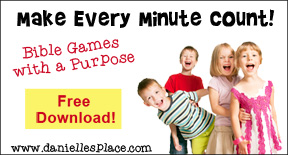