Including: "All Colors Have Value" Activity Sheet

Every Color Has Value Activity Sheet

Value is another important design element. Value refers to the lightness or darkness of a color. Every color has a value.

Determine the Value of Color Activity 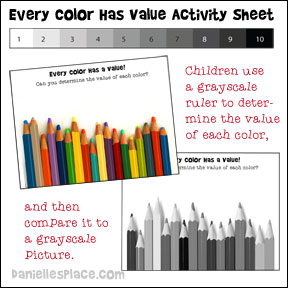 A Color and Black-and-White Picture of Colorful Objects Such as Colored Pencils.

A Grayscale Ruler You can make your own by adding 10% black to each square.)

1. In class explain that is the lightness or darkness of a color, and that every color has a value.

3. When a child finds the matching value he should write the number of the value next the the corresponding colored pencil.

4. When your children are done with their colored sheets show them the black-and-white printout of the colored pencils and have them use the grayscale to see if they picked the correct value of each pencil on the corresponding colored picture.) (Note: Before printing these patterns it is a good idea to calibrate your printer. Print the grayscale first and make sure the grays are each a little darker than the one to the left. If they aren't , your printer is not calibrated correctly.) When printing the grayscale image set your printer to grayscale so that it only uses the black ink 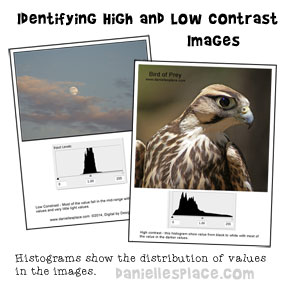 The greater the difference in the value of colors in an image, the bigger the contrast. If a work of art has a lot of very light and very dark areas it is said to have high contrast. Low contrast images use a short range of values, either mostly light values, mostly dark values, or all intermediate values. Most works of art look best with a wide range of tones from black to white; however, some pieces use low contrast to set a mood. Underwater images, rainy or foggy days, snowy overcast days or night scenes can be depicted using low contrast.

Before class print out some images that are high contrast and some that are low contrast. If you have Photoshop or another photo-editing program, make a histogram of the values and place them below the images. (A set of eight images with histograms are on The Resource Room.)

Show your children the photographs or painting and ask them if they think the image is a low contrast image or a high contrast image. Ask them to identify the black values and the white values in each image. (You can also use the grayscale ruler above to pick out values.) Once they have given their response unfold the bottom of the image and show them the histogram. Ask them if the historgam show what they expected.

Value Can Create a Focal Point 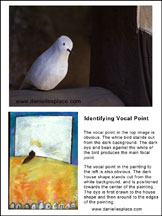 An artist can use value to create a focal point. Our eyes are automatically drawn to high contrast areas or areas where a very dark object meets a very light object. The use of black and white next to each other is the highest contrast possible and produces a strong focal point.

Show your children images with examples of strong focal points.

(A printout of the two pictures to the right are on the Bible-based Art Lesson for Home schools.)

Artists use dark colors to give their works drama, a sense of sadness, loneliness, mystery, and even fear; while lighter works give a sense of happiness, fun, warmth, and hope.

Value is Used to Create Depth or Three-Dimensions

Artists use shadow and highlights to give their works depth.

Show your children an apple outline . Point out the fact that the image is looks flat with no dimension. Next, show them the picture of the dotted apple. Point out that the apple now looks like it pops out of the paper. This effect is called three-dimension. (

2. In class show your children the grayscale picture of the apple and have them identify the darkest values in the picture and the lightest values.

3. Show your children the picture of the apple with the dots. Hold up the picture as far away as you can from the children and then show them the picture up close. Explain that the shadows were created by dots. The bigger and closer the dots the darker the value and the smaller and farther away the dots the lighter the value. In the darkest areas the dots overlap. The lightest values in the image have no dots. When your children are done they may want to use water color paint to paint over the dots, but make sure they are using permanent markers.

4. Hand out the apple shapes and have your children practice making values using the dot technique. Magic markers with pointy tips work best. Tell your children to press down on the markers to make the larger dots and barely touch the paper to make the smaller dots.

5. Make extra copies and have your children practice making shadows using other techniques such as shading with a pencil or crosshatches.

It is important for artists to be aware of value, or the use of dark and light values in their work. Value creates contrast and can make the difference between a piece that is appealing to the eye or dull, dramatic or calm, melancholy or upbeat, scary or peaceful.

Value can also be used to create lines and movement throughout a piece by strategically placing dark or light values next to each other. 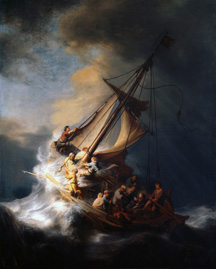 Rembrandt Harmenszoon van Rijn was a Dutch artist who was considered to be one of the best painters of his time. He was known for his portraits, landscapes, and narrative paintings. He painted 60 images of biblical scenes.

Rembrandt’s use of light and dark (value) in his 1633 painting “Christ in the Storm on the Lake of Galilee” creates a dramatic, suspenseful scene. The contrast between the dark foreboding sea and the bright light that illuminates the boat is striking. Although Jesus is in a very dark part of the painting, the contrasting light on his face creates a focal point. His calm demeanor is contrasted with the fear in the disciples’ faces. The dark area in the bottom right-hand side serves ti intensify the lighter area in which the disciples are struggling with the rigging.

Value is also used to create movement and tension throughout the scene. Our eyes naturally follow the illuminated parts of the picture starting with the highest contrast areas moving outward towards the darker areas.

1. How does this painting make you feel?

2. Look at each figure in the painting. What do you think each figure is doing or thinking? How many figures do you see? How many disciples did Jesus have? Who do you think is the extra person in the boat?  - The figure holding on to his cap and the rope, looking out at the viewer, is thought to be a self-portrait of the artist. Rembrandt often included portraits of himself in his works. Why do you think Rembrandt would paint himself in the image? Rembrandt could have been making the point that the biblical stories are relevant to all people, everywhere, at all times. We all experience times in our lives when we are afraid and forget to have faith in Jesus just like the disciples did.

4. Use your finger to follow the light values in the image. Draw that path on a piece of paper.

5. Use your finger to trace the most dominate lines in the painting. Some lines are drawn lines such as the mast of the boat, and other lines are created by the contrast between light and dark areas, some lines stop and start again; some are wavy, and some are straight. Can you find some examples of each type of line?

6. Identify the areas in the painting that have the most contrast.

8. Where is the light coming from in this image?

(This is the first half of the lesson "Value - Artistic Design and The Great Designer" on The Resource Room.)

The simplest type of contrast is a two-toned black and white image. Silhouettes are outlines of an object that is created by backlighting. The object itself shows no detail or very little detail. This artistic technique can be very dramatic in sunset or sunrise scene because of the contrast between the background and subject. Birds flying in a bright sky will produce silhouettes, the outlines of trees in the fog or against the setting sun, or anything photographed when the camera is pointed toward a light source will produce a silhouette.

A. Children can experiment with silhouettes in many different ways. Have them make portrait silhouettes. Tape pieces of white paper to the wall, have one child stand in front of the paper, another child hold a flashlight and another trace the shadow.

C. If you have cameras available practice taking silhouette pictures. Some ideas might be an animal or person in front of a brightly lit window, birds flying during sunset, a dark object against a white background, etc.

Make Your Own Grayscale Ruler Using Tints and Shades 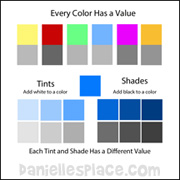 1. Before class print out the tint and shade activity sheet.

3. Have your children practice making tints and shades of the same color, paint the different tints and shades on a piece of paper, cut them out into squares, and then glue the squares together to make a grayscale ruler.

Match Values in a Picture

1. Before class print out the activity sheets and the grayscale rulers.

Tell them to write numbers on the apple that match the zones.

3. After they have identified the zones give them a grayscale ruler to check their answers. They can place the grayscale on the image to see if the values match.

Younger Children - Print out the value swatches without numbers, cut the them apart and mix them up. Have younger children place the swatches in order from lightest to darkest. Children can store their swatches in the Swatches Envelope. ()

In the 17th century, Italian artists used this technique to the extreme. The strong contrast between the light and dark areas of their images created an almost spotlight-like effect. These artists called the technique tenebrismo or tenebrism.

Chiaroscuro is also a technique in which the artist draws on mid-value colored paper, and then adds highlights and shadows with colored pencils or other media. Leonardo Da Vinci used this technique to draw his self-portrait. He used one white chalk and one dark red chalk. Other artists used gouache (paint that is similar to water color, but is opaque) for the white highlights and dark ink for the shadows.

Have your children make their own chiaroscuro drawings on colored paper.

1. Before class print out the apple outline onto a mid-value piece of colored paper.

2. In class have your children identify the different values from the "Match the Value in the Picture" Activity #2 above.

4. The mid-values in the picture should not be covered with pencil.

6. After practicing on the apple they may want make their own designs.

In a Norwegian village a family lived in a valley surrounded by high mountains. The mountains blocked out the sun for six months of every year. People hungered for the sun after so many months of darkness.

Use this Children's Story to discuss how light and dark affects people both physically and spiritually. Study the images on each page of the book and discuss how the artist used value to convey the emotions in the story.

Elements of Design Crafts and Learning Activities on Other Pages

Elements of Design - Point and Dot

Artistic Design and the Great Designer

Line – "Which Path do You Choose?" 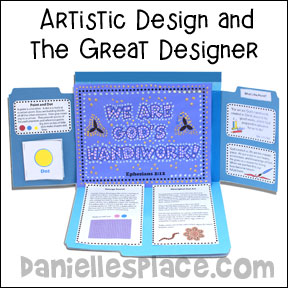 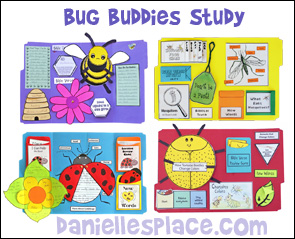 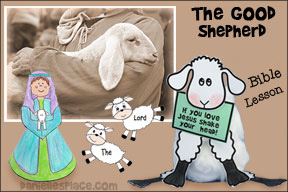 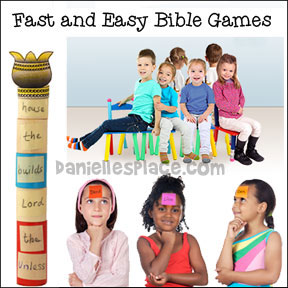 The Daily Doodle: A Journal for Children Ages 7-10

Do - A- Dot Art Discovering my World "Activity Book"